Heart Attack on a Plate is the New Normal 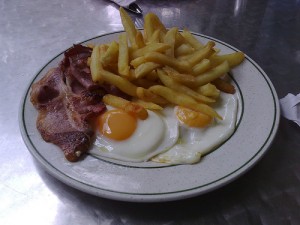 Do a Google search for “breakfast + ‘heart attack on a plate’ ” and you get more than half a million hits (including one for this stock photo, suitable for framing above your kitchen table). That’s a tipoff to breakfast’s reputation as the fattiest, saltiest and otherwise most lethal meal of the day. But are consumers yearning for healthier fare when they go out for breakfast? In Mintel polling on the subject, 66 percent of restaurant goers claimed to be interested in healthier breakfast options. Thirty-nine percent said the breakfasts offered at their local eateries are “too unhealthy.” And that matches the number saying the availability of healthy menu items is the most important factor in their choice of a restaurant for breakfast.

Food-service marketers shouldn’t assume that people are looking simply for lower-calorie choices when they seek healthier restaurant foods. An NPD Group report, released last month, found calories ranking low on the hierarchy when consumers judge restaurant foods as healthy or unhealthy. “The feature most important to consumers seeking healthy menu options is quality, such as fresh, natural and nutritious ingredients,” says that research firm’s report. “Fewer calories were among the least important features.”

Then again, maybe people should pay closer attention the calorie counts. Gallup polling released earlier this year found six in 10 adults classifiable as either overweight (36 percent) or downright obese (27 percent) in 2010. That’s in line with the latest figures from the federal Centers for Disease Control and Prevention, which put the incidence of obesity for Americans 20 and older at 28 percent.

Gallup used respondents’ self-reported height and weight to calculate Body Mass Index scores, and then categorized them accordingly. It likely would have ended up with very different results had it merely asked people to characterize themselves. So we gather from a Harris Interactive/HealthyDay survey last fall. “The poll revealed that 30 percent of overweight people think they’re actually normal size, 70 percent of obese people feel they are merely overweight, and 39 percent of morbidly obese people think they are overweight but not obese,” Harris wrote in its analysis of the findings. “That means fat may be becoming the new normal…”

Putting aside for a moment the enormous health risks of a fattening population, this change also has tremendous implications for service companies outside the food and healthcare categories. Everything from movie theaters, to furniture manufacturers, to travel companies, may need to change their offerings. Is your brand ready?