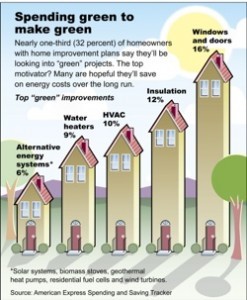 By the time the real estate bubble burst, home improvement had become the national pastime. (Sorry, baseball). People could have the pleasure of spending tons of money while feeling, plausibly, that they were investing in an asset whose value was actually increasing. With the housing market still erratic at best, polls indicate that home improvement has yet to make a sustained comeback – unwelcome news for marketers of everything from paint to appliances to bathroom fixtures.

A Rasmussen Reports poll finds 35 percent of respondents planning to engage in home-improvement projects this spring, down from 45 percent in a similar Rasmussen poll in 2009. In the latest American Express Spending & Saving Tracker poll, 64 percent of homeowners said they plan to spend on renovation projects this year, essentially unchanged from the 62 percent saying so last year. But among home improvers, the amount they expect to spend is down significantly, from an average of $6,200 in 2010 to $3,400 in 2011. American Express identifies a third of those as “green” projects, but we think the motivation to save energy costs is more indicative of consumer sentiment.

If people do take the home-improvement plunge this year, where will they focus their efforts? Indoor projects are about twice as popular as the outdoor variety among the AmEx poll’s respondents, with bathrooms most likely to get a refurbishment. Another poll, conducted by WSL Strategic Retail for Telescope Casual Furniture, found 39 percent of respondents saying they plan to repaint a room, while 29 percent expect to redo their landscaping and 20 percent plan to remodel a bathroom. Fourteen percent will redo the kitchen.

If home-improvement marketers try to persuade potential customers that they’ll get a good payoff for their spending, the message may fall on skeptical ears these days. Studies by Remodeling magazine have found a steady worsening in recent years in the “cost-to-value ratio” — i.e., the amount home improvement costs vs. the amount it adds to the resale value of the house. Given this and the overall economics of the housing market these days, home-improvement brands like Home Depot and Lowes might have more success urging people to spend because they and their near-and-dear ones will enjoy living in the upgraded place, and not because it will pay financial dividends. After all, it is Home, Sweet Home.