As winter-weary consumers gaze longingly toward this year’s vacation season, what sort of jaunts do they have in mind? An Ipsos [email protected] survey, released this week, finds respondents most apt to be in the mood for “relaxing and seeing some of the sights.” Thirty-eight percent of U.S. respondents made this choice. The runner-up was “outdoor living” (20 percent), closely trailed by “strictly kids and family” (18 percent) and “immersed in culture” (17 percent). There were few takers for “thrill seeking” (5 percent) or “cosmopolitan” (3 percent). (Just to clarify, “cosmopolitan” does not mean lounging around drinking Cosmopolitans but instead refers to the likes of “shopping at all the hot spots, eating at the trendiest restaurants, and people watching with the hopes of spotting a celebrity.”) The global rankings in this 24-country poll were similar, with 35 percent picking “relaxing/sights,” 19 percent “outdoor living,” 19 percent “kids/family,” 17 percent “immersed in culture,” 5 percent “thrill seeking” and 5 percent “cosmopolitan.” 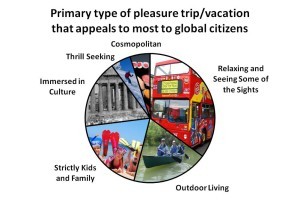 While the Ipsos survey (which was fielded in November) looked at the type of vacation people favor, other research has inquired into preferences in travel destinations. Among the more recent such studies, the annual Travel Leaders’ Travel Trends Survey (released in December and based on bookings data analyzed by this travel-services company) found Las Vegas the most popular domestic destination, just ahead of Orlando, Fla., and cruises to Alaska. The top overseas destination was a Caribbean cruise, with Mexico’s Cancun coming in second.

Harris Interactive offered a different perspective last summer with a survey that asked people where they’d want to go for a vacation if money were no object. The winner in this polling was Italy, with Australia running second. Completing the top five were Ireland, Great Britain and France.

Speaking of money, travel marketers will find potential customers on alert for bargains this year. In a Travel Ticker Traveler Intentions Survey released in December, 94 percent of respondents agreed that “if they found a good deal, they would find a way to fit in more leisure travel in 2011.” Let’s hope that rising gas prices and airline fares don’t squelch those intentions and leave us with another summer of “staycations.”