Where does all the time go? A Quick View for Marketers

“Where does all the time go?” It’s a common lament these days –perhaps even more commonly heard from time-starved Marketing VPs. But this turns out to be one of those rhetorical questions for which a non-rhetorical answer is available. The federal government’s American Time Use Survey takes a detailed look at how U.S. residents ages 15 and older spend their time. The Bureau of Labor Statistics recently issued the data for 2010, and — as a time-saving service to the overworked corporate marketers who read our blog — we’ve picked out some of the highlights from the lengthy report. 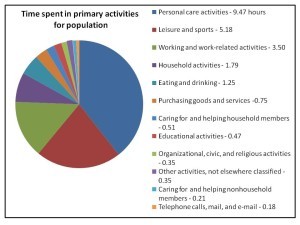 The survey’s findings cast doubt on the notion that men absent themselves from shopping for the household. While 43 percent of women reported having made consumer-goods purchases on their “diary day” (i.e., the day prior to the one on which they were interviewed for the survey), this didn’t wildly exceed the 37 percent of men who said the same. And while women spent more time than men at this activity, the difference wasn’t vast, at 1 hour for the women and 0.8 for the men (among people who engaged in the activity at all).

Some other traditional gender gaps are alive and well, though. A case in point is the category dubbed “household activities,” which includes cooking, housecleaning, lawn/garden care, pet care and the like. Eighty-four percent of women and 67 percent of men engaged in such activities on their diary day. And among those who did so, men averaged 2.1 hours and women averaged 2.6. The disparity was even sharper when you look at the sub-category of “housework”: women were more than twice as likely as men  (49 percent vs. 20 percent) to have done such tasks on their diary day.

Nor have men with kids in the household taken on an equal share of childcare, at least in terms of time spent at it. In households with at least one child under the age of 6, women spent 1.1 hours providing “physical care” (which includes the likes of feeding and bathing their offspring), while men spent an average of 0.4.

In their defense, men can cite the data showing they spend more time at their jobs than women do. On their diary day, employed men worked an average of 41 minutes more than employed women did. And it wasn’t simply a matter of women being more apt than men to work part-time (though they are). Among those with full-time jobs, men worked 8.2 hours, vs. 7.8 for women.

On the other hand, those intent on depicting men as nature’s ignoble men will point out that men treated themselves to more time on “leisure and sports activities” than women did — 5.6 hours vs. 4.8. And how do Americans spend their leisure time? If you guess “watching TV,” you’re on the right track. TV accounted for 2.7 hours, on average, of the survey participants’ diary day, thus consuming more than half of their leisure hours. Men spent more time in front of the tube than women did (2.9 hours vs. 2.5). Men also spent more time than women on the sub-category “participating in sports, exercise and recreation” (0.4 hours vs. 0.2). Women were a bit more likely than men to include “socializing and communicating” in their diary-day leisure activities, with 40 percent of the former and 34 percent of the latter having done so. Among socializers/communicators, though, men spent slightly more time at it than women did (2 hours vs. 1.9 hours).

Amid all of this activity, do Americans have much time left for the category termed “relaxing/thinking”? Alas, no, which may help explain why they feel so pressed for time. A mere 0.3 hours was allotted on diary day to this activity (or inactivity) by the survey’s average participant.